Andre Marshall (associate professor, fire protection engineering and aerospace engineering) is PI and Sheryl Ehrman (professor and chair, chemical and biomolecular engineering) is co-PI on "MRI: Development of Spatially-resolved spray scanning system" ($376,892). Their team seeks to develop an instrument capable of precisely characterizing engineered sprays in order to develop models to describe their behavior and to leverage this understanding for advancements in spray technology. They are focusing on both large-scale sprays (e.g. sprays used in fire suppression applications) and small-scale sprays (e.g. sprays used in microelectronic applications).

Rob Briber (professor and chair, materials science and engineering) is PI, along with several co-PIs, on "MRI: Acquisition of a Small Angle X-Ray Scattering System for the Characterization of Nanoscale Structures" ($345,800). This award will allow for the purchase of a Small Angle X-ray Scattering (SAXS) system for the characterization of nanoscale structures in materials. Nanoscale characterization is a critical step in the design of new materials for applications in areas as diverse as energy, microelectronics, civil infrastructure, defense and health and for the understanding of the basic science underlying these applications. The new SAXS instrument will allow the creation of a multi-user campus and regional state-of-the-art SAXS facility for research and education in the nano- and bio-sciences. This facility will help to catalyze interactions among physical scientists, biologists, and engineers in the Washington, D.C., metropolitan area. The Clark School's Peter Kofinas (professor, bioengineering, and associate dean) and Srinivasa Raghavan (professor, chemical and biomolecular engineering) are among the co-PIs on this project. 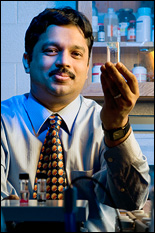