The model car known as The Pride of Maryland stopped within two meters of the finish line at the 2012 Chem-E Car finals, not much farther off than the performance that had earned its team, the Thirsty Turtles, a second place win at the regional competition in April.

But The Pride of Maryland had company. A third of the cars in the competition, held at the national meeting of the American Institute of Chemical Engineers (AIChE) in October, also finished within two meters of the finish line, creating a fight for the top spots. When it was all over, the Thirsty Turtles stood in 11th place, and finished 2nd in the event's poster competition.

The results aren't a disappointment to the relatively young team, which fielded its second car in as many years and found itself up against seasoned opponents.

"We are proud of ourselves and our car," says Department of Chemical and Biomolecular Engineering (ChBE) senior and Thirsty Turtles team member Amy Nutis. "The 2012 National Chem-E Car competition was very intense, with the top teams coming within centimeters of the line and the first place finisher landing perfectly on it…We learned a lot from the other teams…as well as what worked and didn't work from our car's performance. We are all really excited to start fresh and begin designing our new car!"

The AIChE's Chem-E Car contest challenges teams of students to design and construct a small, chemically powered model vehicle. The cars must carry a specified cargo over a distance only revealed at the competition, and stop as close to a finish line as possible. Any kind of chemical reaction may be used to power the cars, which are not remote-controlled. Each team must carefully calculate the duration of the reaction required when they are told how far their vehicle must travel.

This year, AIChE officials announced a target distance of 21 meters and a payload of 300mg at the finals. The Pride of Maryland traveled 22.97 meters. Cornell University's car took first place, while the University of Puerto Rico and Oklahoma State University came in second and third, respectively.

The Pride of Maryland is built on a bi-axial chassis with a four-wheeled frame, and uses a direct drive motor attached to the underside of its top deck. The car is powered by a zinc-air fuel cell battery, which contains six cells connected in series, using zinc as the anode, a specially coated membrane as the separator, and sodium hydroxide as the electrolyte. An iodine photochemical reaction, which detects an absence light from an LED using photoresistors in the reaction chamber, is used to stop the vehicle. 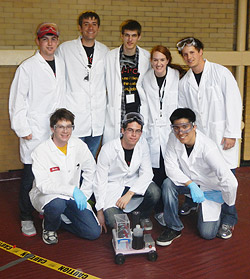 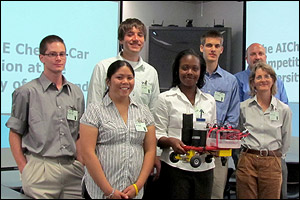