Gas money for your tank doesn't grow on trees, but one day you might be filling up with fuel that does.

A team of researchers at the University of Maryland and Bowie State University, including Department of Chemical and Biomolecular Engineering assistant professor and co-PI Ganesh Sriram, is working on ways to turn poplar trees into high-yield crops for biofuels including ethanol, the renewable biofuel used in gasoline blends and flex-fuel vehicles. The hybrid trees would be grown on plantations and harvested without affecting existing woodlands.

The study is funded by a $3.2 million, four-year grant from the National Science Foundation's Plant Genome Research Project, which supports research on plants seen as having economic and agricultural importance. Using the recently completed poplar genome, the researchers are focusing on ways to improve the tree's nitrogen processing capability, which will enhance its growth rate and feasibility for use in fuel production.

In the United States, corn is the crop of choice for biofuel production. While corn is renewable, home-grown (unlike foreign oil) and plentiful, it may not be the best solution.

"We need to develop an alternative crop that we use exclusively for biofuels and not food," Sriram explains.

Enter poplar (also known as cottonwood or aspen), which is already commonly cultivated for the production of paper and timber.

"What we want are trees like poplar that grow fast and efficiently so they can become the raw material for cellulosic [fiber-based] biofuel,” says Sriram. "The carbon found in poplar could be converted into fuels just like the sugars we extract from corn."

"Growing trees doesn’t eat into farmland, and trees don't require a lot of maintenance during their growth cycle,” Coleman says. "A dedicated energy crop like poplar would contribute to the development of a sustainable and renewable energy system."

Simply growing acres of poplar trees to convert into biofuel isn't enough to solve current fuel problems. Researchers already know how to make ethanol from fibrous plants, but for poplar to be truly effective as a biofuel source, its growth cycle needs to speed up and become more efficient. One of the keys to doing so is to understand how it stores and cycles nitrogen, since nitrogen is an important factor in the growth and productivity of trees and crops.

The fertilizers that help produce big harvests are rich in nitrogen, but are expensive and must be reapplied each year. Poplar is a perennial plant, capable of pulling nitrogen from its leaves, storing it through the winter, and redistributing it in the spring. And while a crop like corn must be replanted each year, a poplar tree is capable of regrowing itself from its roots after being cut, and may go through several cycles of growth and harvest throughout its life before a new tree needs to replace it.

"Both the growth in the spring and regrowth from roots after the stems are harvested depend on the availability of stored nitrogen," says Coleman. "The data we collect will allow us to understand mechanisms of nitrogen cycling, determine how to increase the rates of the cellular reactions, and identify the genes that play a crucial role in the process. Eventually, we should be able to breed a variety of poplar with a more efficient nitrogen process, optimized for growth and rapid maturity."

The research team, a mix of experts in metabolic engineering, genetics and plant biology, are examining how the thousands of genes in poplar are being switched on and off during the nitrogen storage cycle, measuring the rates of dozens of chemical reactions and studying the many proteins that facilitate all of the activity.

"What we're looking for is the most efficient way for these plants to process nitrogen,” Sriram explains. "It's like dealing with traffic. Imagine you’ve got cars on a road, each can only hold one passenger, and that can’t be changed. If you want more people to get to a destination in a certain amount of time, you can increase the speed limits, add more traffic lanes, reroute the cars onto parallel roads, avoid delays, or change the timing of the traffic lights. That's what we're doing on a genetic and molecular level for poplar."

The team's large-scale study of woody plants for use in biofuel production has only recently been made possible by the availability of the poplar tree's genome, a map of its complete genetic structure. "We're one of the first groups to work on nitrogen cycling and metabolism in poplar," says Sriram. "We expect to produce a large amount of unprecedented information about the way nitrogen moves around and is stored in a tree. It's an amazing problem we can work on together."

For More Information About the Grant:

See the NSF award abstract: "An Integrative Study of Nitrogen Cycling and Storage in Poplar" »
Read the grant announcement on the PSLA web site » 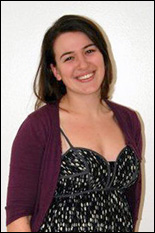 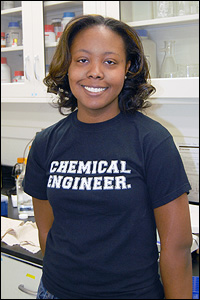 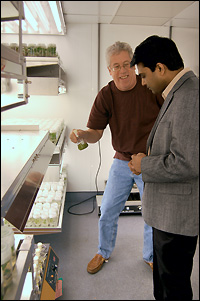 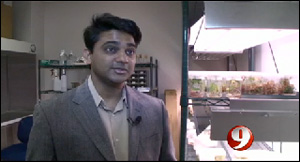