A new electrolyte membrane and the technique used to synthesize it could substantially improve the performance and cost of low temperature fuel cells. The work, by Clark School Department of Chemical and Biomolecular Engineering (ChBE) graduate student Yanting Luo and former ChBE assistant research scientist Juchen Guo, was recently featured on the cover of Macromolecular Chemistry and Physics.

Luo, advised by ChBE assistant professor and University of Maryland Energy Research Center member Chunsheng Wang, synthesized a new polymer designed for use as the solid alkaline polymer electrolyte (APE) in alkaline fuel cells (AFC). AFCs are an alternative to the proton-exchange membrane fuel cells (PEMFCs). Like PEMFCs, AFCs can operate at relatively low temperatures, making them suitable for use in transportation and electronics.

AFCs have existed in various forms since the 1930s. While more efficient and lower in cost than PEMFCs, as well as capable of generating heat and drinking water as by-products, they require pure compressed oxygen and hydrogen to work and to prevent degradation if exposed to carbon dioxide. As a result, their use has often been restricted to sealed environments, including spacecraft. Luo says the development of a solid APE to replace the liquid electrolyte has inspired a "revived interest" in producing AFCs for the consumer market. Creating a more durable solid electrolyte with a high power output for AFCs is a key step in their commercialization process.

Using a technique called "miniemulsion copolymerization," Luo and her colleagues created an APE that could be tuned (adjusted and controlled) for ideal mechanical properties and conductivity during the manufacturing process.

The polymer, QPMBV, was formulated from a group of basic monomer building blocks, selected for their individual superior functions, instead of using the more common approach of modifying an existing polymer. When the materials did not produce a consistent and durable product after reacting in a typical oil and water emulsion, Luo used a miniemulsion, in which the oil monomer particles were only 50-500 nanometers in diameter, instead of the typical 1-10 microns. The result was a more consistent and fine dispersion of the monomers in the water phase, which in turn created a higher surface area for bulk copolymerization reactions. A higher percentage of the monomers successfully completed their reactions, resulting in a product with both a high molecular weight and the qualities Luo was looking for.

"APEs still remain in their infancy compared to the commercialized proton exchange membranes," she says. "This work is a significant advancement in the APE that will push AFC technology forward."

Despite the challenges of developing the new material and striving for "a new ideal" over the past three years, Luo has found the experience rewarding as she has moved from a proof-of-concept to a promising material to optimizing production and now testing in an alkaline fuel cell system.

"After [working on] this project, I could be a polymerist, experimenter or fuel cell technician," she says. "I feel happy with what we have done and hope this promising work could really make a difference in our daily lives."

In the next stage of her research, Luo plans to further improve the mechanical properties and durability of the APE membrane, and to explore its potential use in other products such as flow and alkaline batteries. 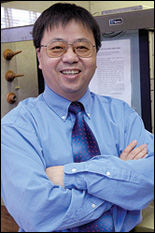