Associate Professor and Patrick and Marguerite Sung Professor in Chemical and Biomolecular Engineering Srinivasa Raghavan and former advisee Dr. Rakesh Kumar (Ph.D. '10, chemical engineering) are part of a team that has developed a non-toxic, recyclable agent that can solidify oil on salt water so that it can be scooped up like the fat that forms on the top of a pot of chilled chicken soup. The agent could potentially be used to recover oil lost in the British Petroleum (BP) spill in the Gulf of Mexico.

"Professor John is a very creative organic chemist who has pioneered ways to convert sugars found in nature—for example, in fruits and nuts—into functional molecules," Raghavan explains. "He's synthesized a class of molecules known as 'organogelators' because they can convert liquid oil into a gel-like material. One of my main interests and areas of expertise is in the study of gels. He and I have had a long-standing collaboration, so he invited my group to work on the project with his."

Raghavan explains that unlike most organogelators, theirs does not break down in the presence of water. In the laboratory, the team added their sugar compound, mixed in alcohol, to diesel oil floating on top of a saline solution.

"Within five minutes, the oil had gelled into a substance thick enough to be scooped up," says John. The team then separated 80 percent of the oil from the gel using a vacuum distillation process.

The gelling agent is environmentally benign. It uses a sugar-based molecule that can be obtained from renewable sources and is biodegradable. It is effective on many types of oil ranging from crude to vegetable, and only a relatively small amount of it—five percent of the volume of the oil being recovered—is required for the process to work.

Above: Video showing diesel fuel transformed into a gel, allowing it to be scooped out of salt water. Credit: George John, CCNY.

The BP oil spill, which began April 24, had been pouring oil into the Gulf of Mexico at the rate of 40,000 barrels per day. Current clean-up methods, which have been in use for more than 40 years, include burning, skimming oil and using chemical dispersants. The latter can be toxic to marine life and may have unknown long-term cumulative effects on the environment, John pointed out.

The team's findings were reported July 15, 2010 in the journal Angewandte Chemie International Edition.

Story adapted from the original press release by CCNY. 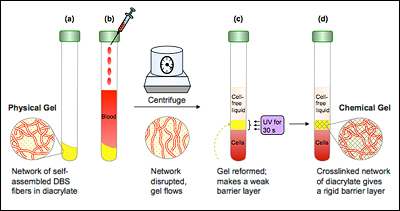 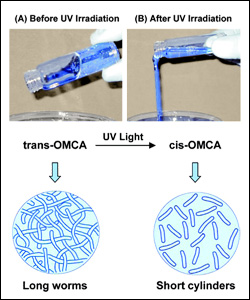