Department of Chemical and Biomolecular Engineering (ChBE) associate professor Srinivasa Raghavan has been named the first Patrick and Marguerite Sung Professor in Chemical Engineering, effective March 1, 2009. The five-year professorship is supported by a $500,000 endowment given by alumni T.K. "Patrick" (M.S. '69 and Ph.D. '72, chemical engineering) and Marguerite (B.S. '70, mathematics) Sung.

The proceeds of the endowment will be used to support the research of Raghavan’s Complex Fluids and Nanomaterials Group, which studies the spontaneous self-assembly of molecules and nanoparticles at the nano- and micro scales. The group uses this behavior in the design of new types of "smart" fluids and materials that could be useful in consumer products, oil recovery, drug delivery, wound care, and nanotechnology.

"This gift is especially significant since it is the first Professorship within the Department of Chemical and Biomolecular Engineering," said ChBE Professor and Chair F. Joseph Schork. "These types of gifts are what will enable the department to move to the next level in the chemical engineering community and remain solid contributors to the Clark School's continued success." He added that Raghavan has developed an excellent reputation in his field during his seven years on the ChBE faculty, publishing extensively, filing patents for innovative new materials including the blood-clotting "nano-velcro", and founding a startup company called Remedium Technologies with current and former members of his research group.

The Patrick and Marguerite Sung Professorship in Chemical Engineering is one of two endowed professorships established by a $1.5 million gift from the Sungs to the Clark School in 2007. The second, The Patrick and Marguerite Sung Distinguished Professorship in Chemical Engineering, is designed to attract a leader in chemical engineering education and research to the Clark School. The search to fill the Distinguished Professorship will begin in approximately five years. The Sungs' gift supports the University of Maryland’s Great Expectations campaign. 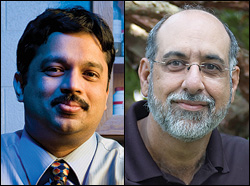