In his presentation, "Sustainability of Small-Scale Development in Burkina Faso," Conway, a project leader with the University of Maryland chapter of Engineers Without Borders (EWB), described how his team's work in installing solar-powered lights, charging stations and water pumps in Africa challenged their notions of what sustainability really meant. For EWB, "sustainability" means more than what resource generates the power.

"When we send a team to Burkina Faso to install a system," he told the audience, "our number one question is, 'When we leave...will our system continue to work without us?'" Whether a lighting system could survive infestations of insects, whether a solar-powered pump could still be used by hand in the event of a failure, whether equipment could be repaired by residents with locally-available parts, and whether a solution could be replicated and expanded beyond the original installation all became part of their definition of "sustainability."

In "Energy from Sunlight: Sustainable Processing of Materials," Ehrman discussed a variety of issues affecting the adoption of solar power. In the U.S., consumers face a number of challenges when trying to convert to solar power: the technology is still expensive, government incentives are not straightforward, and buyers are faced with the uncertainty of being able to purchase replacement parts. Storage of solar energy for later use is also still problematic. She presented her own research group's potential solutions to that problem, including photoelectrochemical (PEC) systems that convert sunlight into hydrogen split from water, which could then be stored or transported. She also discussed constraints of economy, efficiency, and materials, as well as reclamation of materials that are byproducts of solar cell production.

In his presentation, "Advanced Electrode Materials for Li-Ion Batteries," Guo described advances in the battery research he conducts with Assistant Professor Chunsheng Wang (joint, UMERC). The pair have been developing a new silicon-based electrode for lithium-based rechargeable batteries that can be used in vehicles, to store wind energy, or as part of a "smart grid" system. The new electrode incorporates nano-sized silicon particles into a porous 3D polymer scaffold structure capable of accommodating the silicon's large volume change during the charge/discharge process, keeping the electrode intact and increasing the lifespan of the battery. Guo also discussed a new high-power lithium-sulfer battery under development.

In "Low Temperature Solid Oxide Fuel Cells: A Transformational Energy Conversion Technology," Wachsman (joint; Department of Materials Science and Engineering), the director of the University of Maryland Energy Research Center, discussed his group's recent advances in the development of solid oxide fuel cells. These cells have the flexibility of operating on hydrogen or diesel fuel, which could make them feasible for use in vehicles before a hydrogen fuel infrastructure is in place, and allow them to remain functional after. His team is also working on reducing the cells' operating temperature to 600°C or lower in order to make them safe for automobiles. Wachsman also described his work on other types of fuel cells that could be used to power a home. Advances in cathode technology could provide ten times the power density—about 10W per cm3—at half the operating temperature than the commercially available cells currently sold by Bloom Energy. 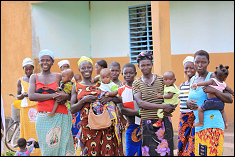