Department of Chemical and Biomolecular Engineering alumnus Matthew Wook Chang's (Ph.D. '03) creation of a strain of E. coli that seeks out and destroys another bacterium, Pseudomonas aeruginosa, was featured in The Scientist following the publication of the work in Molecular Systems Biology. Chang's former advisor, Fischell Department of Bioengineering professor and chair William E. Bentley, and fellow alumnus and Bentley Group member John March (Ph.D. '05) we also featured in The Scientist's story, "Bacteria Kamikazes."

P. aeruginosa is a leading cause of hospital-acquired infections. It attacks the gastrointestinal tract and lungs, quickly developing a resistance to antibiotics. Doctors are forced to use multiple medications to fight P. aeruginosa infections, which has the unfortunate side effect of destroying the body's good bacteria along with the bad, ironically leaving the patient susceptible to other kinds of bacterial infections.

Like many bacteria, P. aeruginosa uses a form of communication known as quorum sensing, in which an exchange of signaling molecules is used to coordinate its pathogenic activity.

Chang and his colleague Chueh Loo Poh, both professors in the School of Chemical and Biomedical Engineering at Nanyang Technological University, Singapore, engineered a strain of E. coli bacteria to respond to the presence of P. aeruginosa's signaling molecules by producing pyocin S5, a protein antibiotic. In tests, the modified E. coli eventually burst, releasing the antibiotic onto P. aeruginosa and killing them both. Treatment could be administered as a precaution, leaving the harmless modified E. coli laying in wait inside the body of an at-risk patient, springing into action only if a P. aeruginosa infection occurs. And while deadly to P. aeruginosa, pyocin S5 does not affect the body's symbiotic ("good") bacteria.

"[Chang's] paper sets up [an] innovative use of synthetic biology for engineering microbes to carry out functions that they normally wouldn’t do," Bentley, who also works extensively with modifying E. coli to serve as disease-fighting tools, is quoted as saying in the article.

Chang and Poh plan to begin in vivo testing soon. If all goes well, Chang told The Scientist, they could develop more kinds of engineered bacteria, each customized to attack a different pathogen. Read "Bacteria Kamikazes" by Kelly Rae Chi online at The Scientist »

"Side Effects May Not Include…" 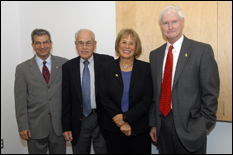