A three-dimensional silica particle and its accompanying reaction engineering process, both invented at the University of Maryland, are poised to boost the efficiency and lower the cost of producing some of the world’s most important commodity plastics.

Silica, a porous material with an extremely high surface area, is ideal for use as an inert, flat substrate (surface) on which to perform high-activity catalytic reactions. These substrates are used in industry to create a class of polymers called polyolefins, which includes polyethylene and polypropylene. In that process, the silica substrates are coated with a catalyst, which reacts with another material to create the final product. Their pores swell with the new material and they fracture, exposing even more reaction sites, until they disintegrate and the reactions end.

This technique is highly inefficient. Because the breakdown of the silica is hard to control or predict, the reactions end before all of the catalyst has had a chance to react. According to Choi, up to 90 percent of it is wasted.

Choi and his team have created a new, three dimensional, ultraporous silica nanoparticle that allows 80-90 percent of the catalyst to react, resulting in less waste and a higher product yield. Known as pseudo inverse opal silica (PIOS) for its similarity in structure and color to the gem, the particle takes the form of something like empty eggshells clumped together in a sphere, forming a ball made out of tiny, empty balls. 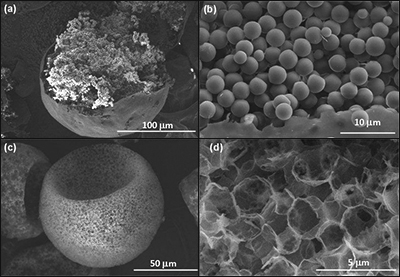 The PIOS particles provide about the same amount of surface area and pores as their two dimensional counterparts, but their open structure allows both catalysts and reactants to get to their reaction sites quickly and easily, instead of being limited to squeezing and in out of tiny pores. The open regions also allow the product of the reactions, the polymer, to "get out of the way" and expose new reaction sites. The initial reaction rate is extremely high, and more than twice as much polymer is produced than in current industry-standard reactions.

“Our work shows that novel materials can be easily created by advanced polymer reaction engineering techniques,” says Choi. “Our particles have unique morphological characteristics that can be used for many interesting industrial applications.” 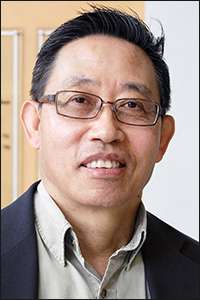